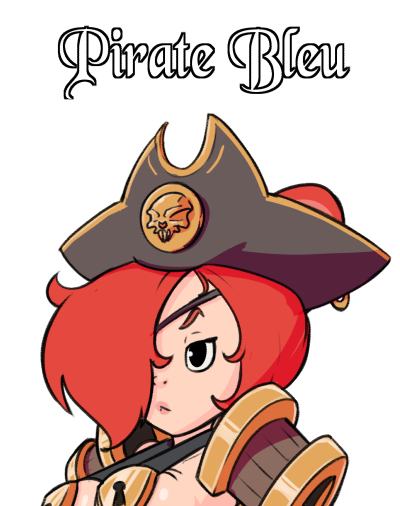 In fact, yes she was! As hard as the goddesses worked to rid Lucernia from the pirates, they weren’t able to do it alone; A few rogue pirates offered to help, in exchange for a few privileges. The ones who went to jail would obviously take any chance they could to get back at them, but for now, Bleu remains as the leader of the Outer Rim Merchant’s Guild, one of the most influential guilds in the outskirts of Lucernia. What better position for an ex-pirate than a bank manager?

As for the second question, yes, it can. But we’re currently out of LP to use our magic!

Dr.D said:
Does dias have any way of getting out of this mess.
Ryuran said:
Lets see if dias has any air capabilities.

Dias is just a butler bot, he can’t do those things… Yet. All he’s good for now other than punching things is helping with umm… Stress relief.

Eronas said:
have the shrooms bring any captured guards! Sources of lust and maybe they can help make more shroom minions! (or be milked to help feed them?)
Xaveir said:
Do we have any guards taken prisoner? If so we should get to work getting some lust together in case if another emergency
Raven said:
Make sure the mushminions new friends and those followers at the brothel comes along gotta get the that lust level over 9000
Knolden said:
[...] Also check if the Mushminions brought some of the guards they had fun with along.

With all this chaos we couldn’t get them out! But we still have them on our stats, what’s up with that? 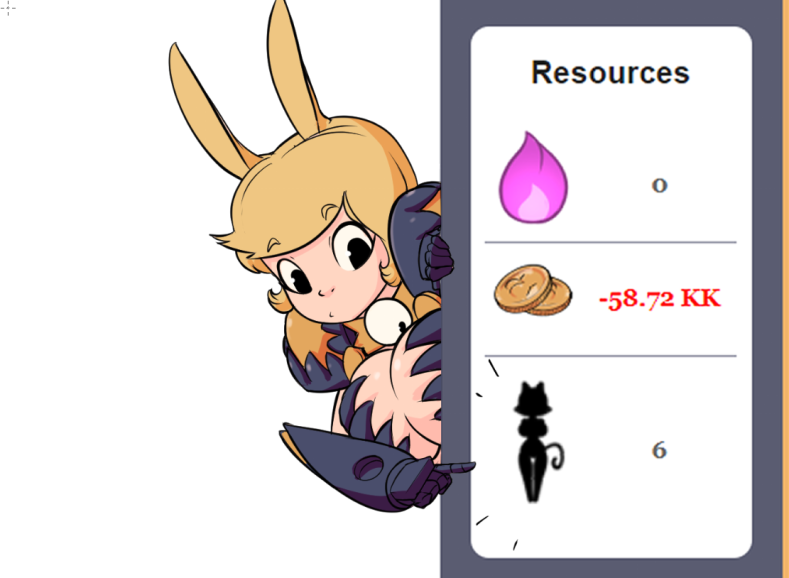 Don’t worry, the women will find their way to the tower, no one can resist the pleasure of indulging in the power of the Hearth! Now shut up and keep running!

George said:
Time to get the other member of the team. Maybe a quick rest first to fuck.... er strategize with the rest of the team.

Okay, we should be far enough now, let’s take a break and hatch a plan. 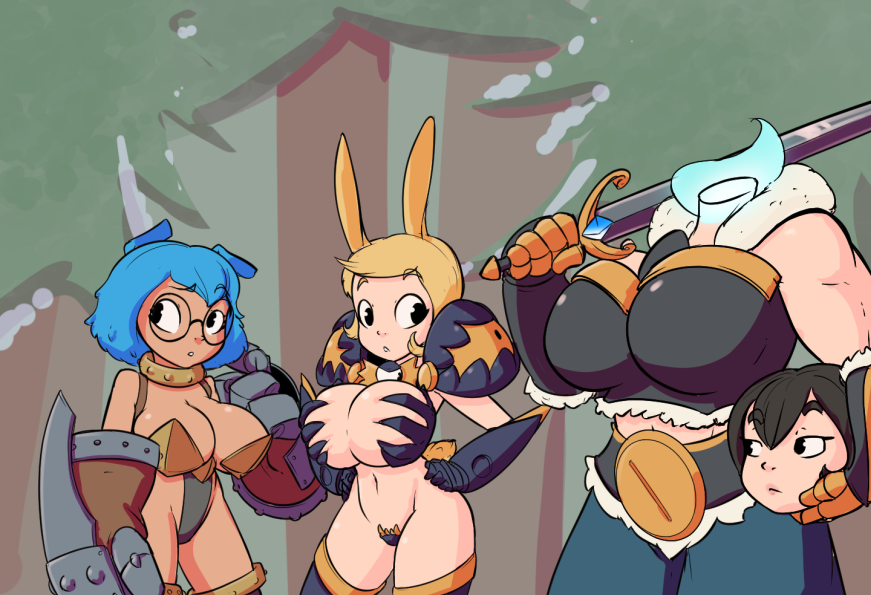 Azure said:
Time to work out a way to upgrade the minions, also they need to spread their spores to surround the town, with a wall of fodder it should at least buy the group half a day for the guards to get past them, or at worse clean that mess up.
OniegdeLord said:
Game Question can your minions/followers be promoted to advanced classes? example: warrior, sorcerer 🧙‍♂️, thief, martial artist, bard, rune fencier 🤺 , gun mage. ect. Ect.
Woodlelewd said:
Leave a minion behind to see if Bleu follows you, or remains in town. Scout Mushie.

They’re right, we should leave someone behind to keep an eye on Bleu’s movements.

Hmm… I think I have an idea.

We don’t have any training facilities to change our minion’s classes yet, but we can certainly try to make them stealthy, let’s see… 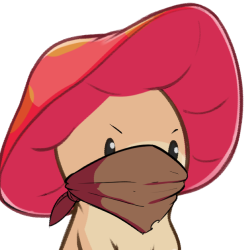 Alright boy, stay here in the bushes and report back to us if anyone passes by, okay?

Unknownmyriad said:
Well, Ophi, if you didn't have a bounty on your head before, you certainly do now. Would that be considered a part of the crippling debt or something else?

Don’t worry about that. No bankers, no debts, right? *wink wink*

I can’t even wink in this thing…

How far away are we? I really want to go take a look at the crystal you mentioned.

Huginn said:
Let's ask Lily for an explanation of the crystal technology.

Yeah, right, I’d never seen one of those before, what’s up with that thing?

If it’s what I think it is, It’s a source of power, like the blue crystals that make the skyships float! Lucia destroyed most of them, but you can still find shards in the caves of the ancients. It’s amazing you found one that’s still in one piece!

She’s the reason we attacked the town? Not quite what I expected…

Okay shush all of you, my tower isn’t gonna rebuild itself! Let’s get going!

Genis94 said:
You heard the grouchy eyeball! We're gonna need the hearth in working order if we're gonna stand a chance against that sexually frustrated mouse. Have Lily and her bot get to work while we get the magical half of the equation.

Great idea, let’s split the party! Ceres, have your mushminions escort the blue girl back to the tower while we go and find our wizard!

Yes sir! You heard the man, guard the girl!

Ummm are you sure it’s safe? I mean, they look cute enough but…

Ah, don’t worry, they’re lovely! Lily, these are the mushminions. Mushminions, this is Lily, you guys take care of her!

TD said:
Teach the mushrooms a greeting dance tha they must perform whenever they meet a new ally.

Daaawwww, I can’t be scared of something this cute. Okay, I’ll go with them.

Knolden said:
Ask Lily if she knows where Egor the Roaming Wizard is hanging out lately. [...]

One last thing, do you know where Egor is these days?

He got some tools with me before he left… Said something about an old temple in the mountains. Also, he had a really goofy looking girl with him.

Egor with a girl? That’s rare.

Oh no no, it didn’t look like they were *together*, I think she was a bodyguard or something.

Enough chit-chat, time to continue marching! Blue girl, the minions will escort you to the tower, just keep heading northeast from here, you can’t miss it.

Dvspuss said:
this party is lacking in the dick department, let’s go and find the mage and his (hopefully) big wand
Jaganad said:
Get to the mountains and find this elf, intimidate him with the power of tiddy and/or legions of adorable mushroom people and drag him to the Hearth.
M said:
Go get that last party member! Hopefully with only minimal shenanigans along the way...

And so, before the writer could procrastinate even more, the party split up. Lily was escorted on an uneventful trip back to the tower by Dias and the mushminions, while Ophi and the others went to the ruins to find Elgor, The Roaming Wizard.

Okay, I think this is the right place…

Gee, I wonder why.

Shut up you two, there’s something coming! 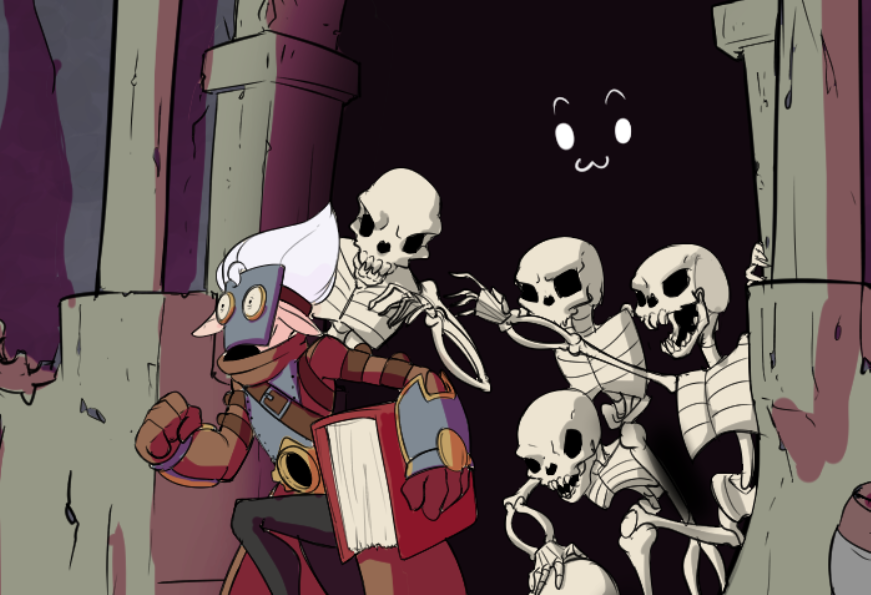 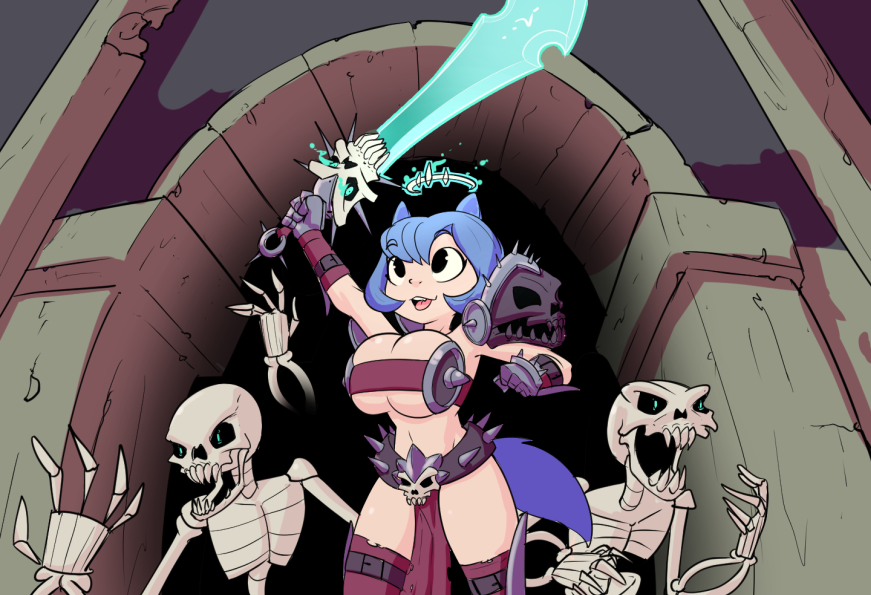 I’m finally free of my bindings! Soon all life on Lucernia will share the pain I endured for the last hundreds of years! 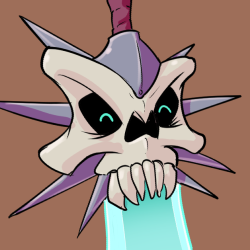 Lars!!! Long time no see mate! What have you been up to?!

Ah you know, the usual. Stuck in an orb on some cave for a millenium, some girl shows up and now she’s wearing me like a piece of gear…

Are you guys friends with Jotariel too?! :3

Previous
Never split the party
Next

The evil overlord retirement package consists of immortality and itemization it would seem!

Why is the elf wearing a welding mask?

The real question is: Why not?

Well, the evil overlords certainly got fucked over. Jhon’s gonna get blood all over his blade in this state!

Don’t worry, we’ll muzzle him properly if he tries to bite anyone 😛