Out with it girl! The village is in a pinch and I don’t have a lot of free time. You say you can help? What do you propose?

Ophi: Well, you see… We’re sort of at odds with Bleu and her interest rates as well. We were hoping we could talk about a little… Umm… Commercial alliance?

A commercial alliance in the guild’s territory? I can’t tell if you’re brave or insane. Okay fine, i’ll hear you out, what’s your plan?

KinkyQuill said:
honesty is the best policy! we are attempting to revive an ancient evil empire, and have access to much lost magic. also, we've got a druid who knows her stuff. let us have a look, and if we fix things, swear fealty. fail and we'll leave.

The plan is taking over this island and then the whole world!

Ophi quickly covers Larahmal’s orb in her armor, but she’s too slow to fool the sharp mayor and his secretaries.

I think her armor has spoken, sir.

It does look a bit like an eye, sir.

I knew I had heard something before!

Hmmm… yes, I thought it looked weird… What’s up with that?

Ophi nervously unblocks the eye on her armor. Who knows what the lunatic overlord will say to offend this guy.

Hey! I resent that… Ahem. Well, if you must know, I’m the great Overlord Larahmal, and all will soon bow to me!

I think it may be delirious, sir.

It has a bad case of chuunibyou, sir.

How dare! Even if I’m currently in a bit of a pinch, my… huh… colleague here is representing the new empire in my stead.

Larahmal huh… The Overlord… I remember reading about something like this in an old book I had when I was a pup… Intriguing.

OniedgeLord said:
ophi: “the mouse guild has you in a bind as well that makes the two of us. we help you. you help us. they have been getting a bit too overeager with there interest rates lately. you side with us will give them a taste of there own medicine”

It’s true, unfortunately. I’ve been stuck with this armor for a bit now.

Truth is Bleu also put me out of business, and they’re chasing me… Normally I would be against it, but now we have an army of mushrooms that we can use to push her out of the island.

Listen girl, all I’m worried about is the good of my people, and it doesn’t get much worse than Bleu. So, what do you want from us?

Knolden said:
Ask the Mayor if helping with the crab issue would make him allow you to start a business in his town (brothel shhhh) Also since he has such lovely assistants maybe he can recommend a good accountant?
Llywey said:
Offer help in exchange for permission to set up a brothel. Not only feeds lust power, but can be used to infect and dominate the residents and bend them into fealty.
Griss said:
I'd say saving this town from economic collapse is worth the price of fealty. We're going to need vassal states eventually if we plan to actually use the word 'empire'. Just make sure to get it in writing first.
Eronas said:
"How does not having to pay your loans back, and being put on a flat percentage based tax system sound? If you agree to swear fealty to me, I'll get that Crabee Queen of yours fixed and making steam again, and keep you protected from Bleu."

Well now you can join us then! All we need is the support of the denizens of the island. We’ll even send you some workers to help put you back on your feet.

That doesn’t sound so bad, sir.

It might be too good to be true, sir.

True, true… And what else would you need?

For now, all we need is a permit to build here, we’ll have to draft an agreement to import some of your production, we can trade it for our workforce maybe.

It wouldn’t be terrible to have someone to organize our finances either.

Sure, I’ll bite. Bleu’s been a pain in my ass for a long time. I’ll help you, but only if you manage to do something about the Queen Crabee. This town won’t last long with her in that state anyway. If you can do it then you have yourselves a deal.

If can have a quick chat with the queen maybe I can try to figure out what the problem is.

You got it. Mortimer, get them to the lake. You two go with them, we’ll see if they’re as good as they say.

Knolden said:
Hmm. Is there any way for Ophi to see how her other henchmen and minions not with her are doing? Like sy. How is the mushminion party doing when it comes to "acquiring" new followers for the tower?

While mortimer guides them to the pier, Ophi starts fiddling with the crown artifact on her head.

Hey, old man. I really need to check in on Elgor, I’m not sure I trust him and Lily to be alone and not explode anything.

If I remember correctly, just turn it around, there’s a dial on the bottom.

Ophi finds the dial and spins it. The crown starts spinning quickly in the air, and points itself forward before a beam of luminous energy is projected in front of her.

Are you sure? This doesn’t look like anything I’ve ever seen. It doesn’t even match our art style!

Don’t worry, it’s just zapping through the dimensional channels while it calibrates.

Hey, floating image, that’s rad. Is that some kind of illusion magic?

That kitty is so cute! Do you have any more of them?

I don’t think so, I’m not really controlling it.

Nah here’s how you do it, just focus your mind on who you want to see. But remember it only works on people linked to the tower.

Knolden said:
Let's see what happens if one of the crablings play with a leafling?

Ophi tries focusing on smaller creatures first. She wonders how the leaflings that followed them here are doing with the crabee drones in the village. 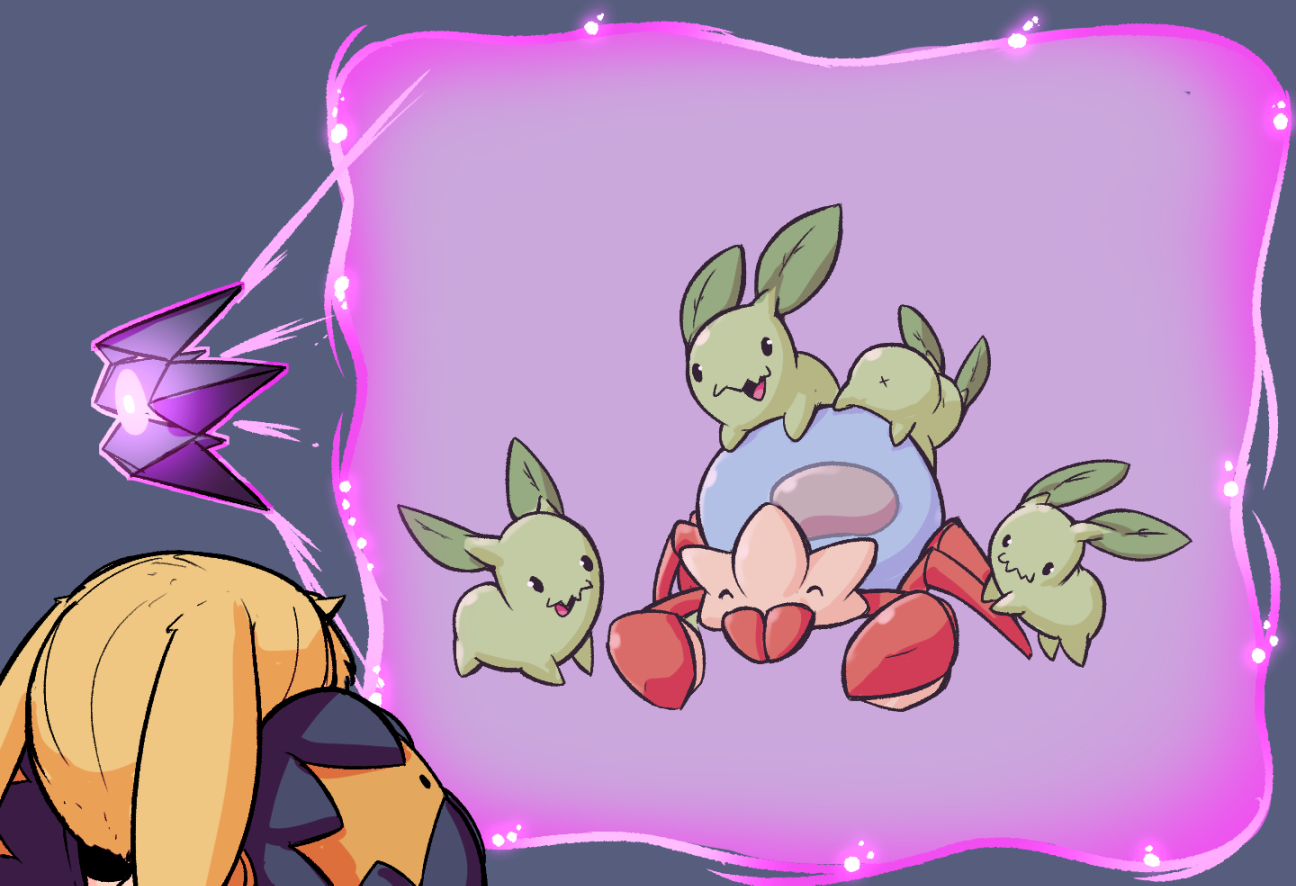 Seems the small crabs are immune to the Leaflings toxin and became quick friends.

Let’s try something else then.

Ophi thinks about the Fun Guys squad they sent to scout around Gouda. And the image quickly changes into something else. 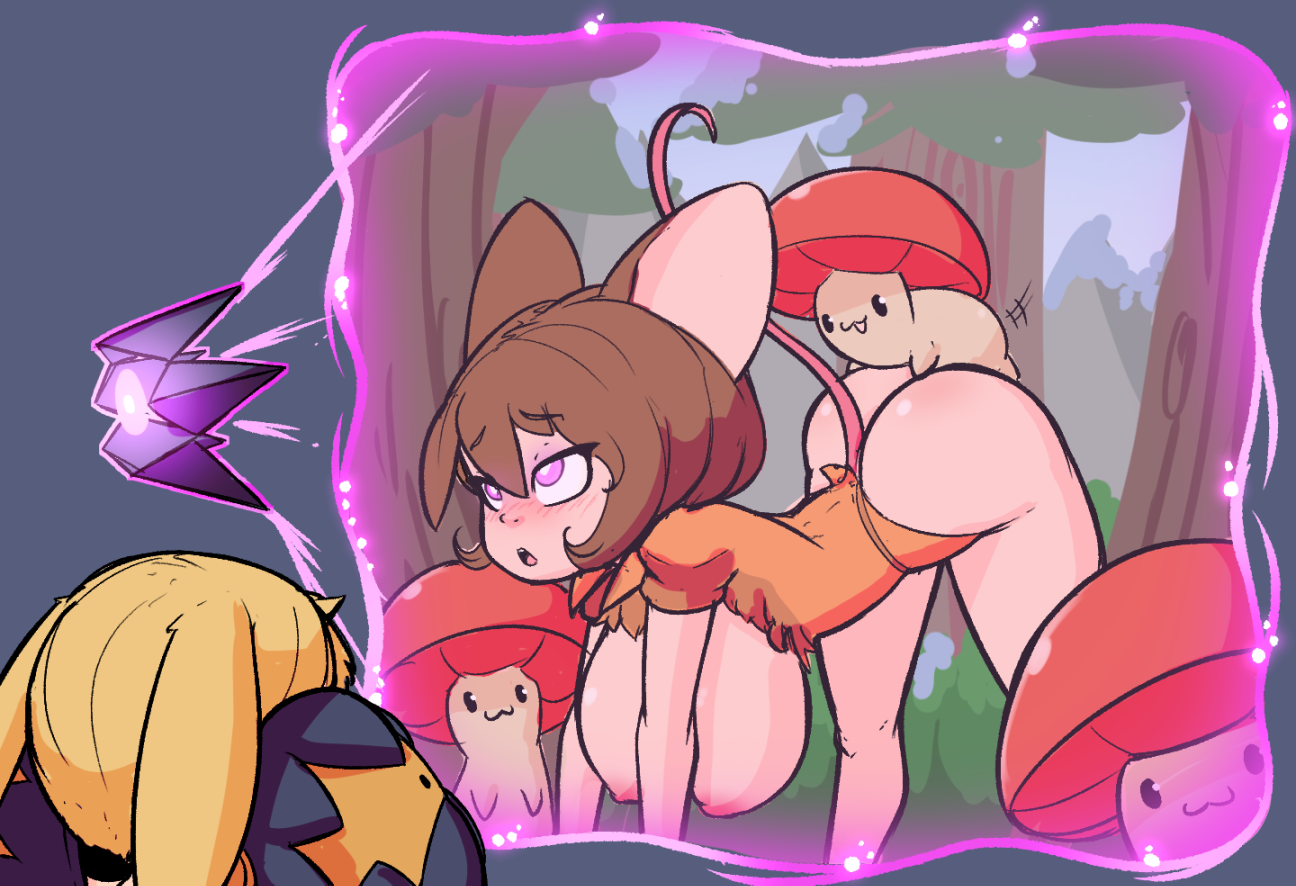 Nope! Nope. Definitely not now. Something else, please!

Is that one of… 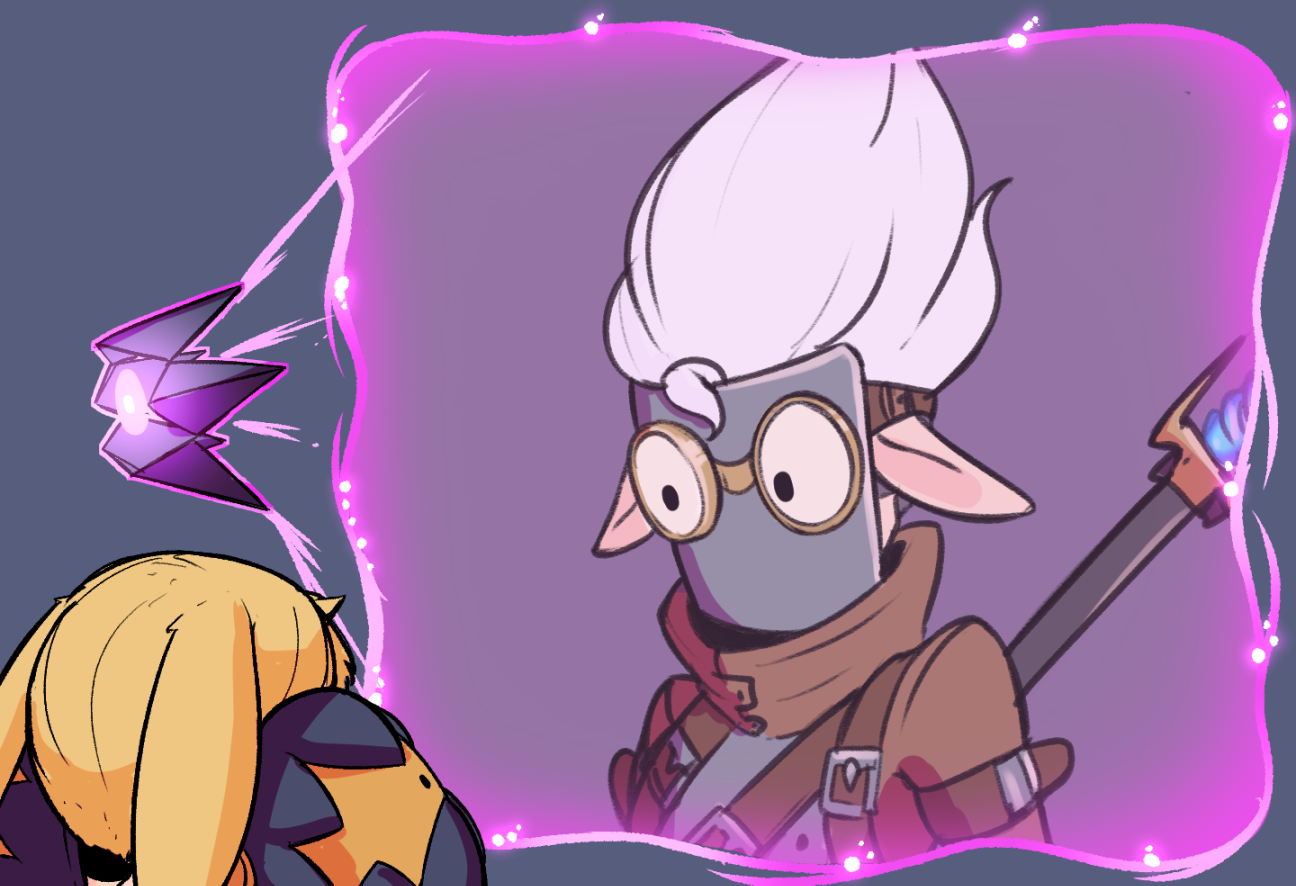 Oh, Ophi? How are you doing this?

Nope. Not talking about it.

What is this then, some kind of portable teleorb? And who are you talking to?

No! Everything’s okay, good of you to check in. Is that some new magic you learned then?

It seems it’s just part of the whole tower business. It didn’t turn off or anything when I left then?

From what I’ve seen, everything’s golden. Ah, you might like to know your forest floor is complete. It grew pretty fast with the druid’s magic, I’ve even sent one of the mushminions to grab some plant samples. 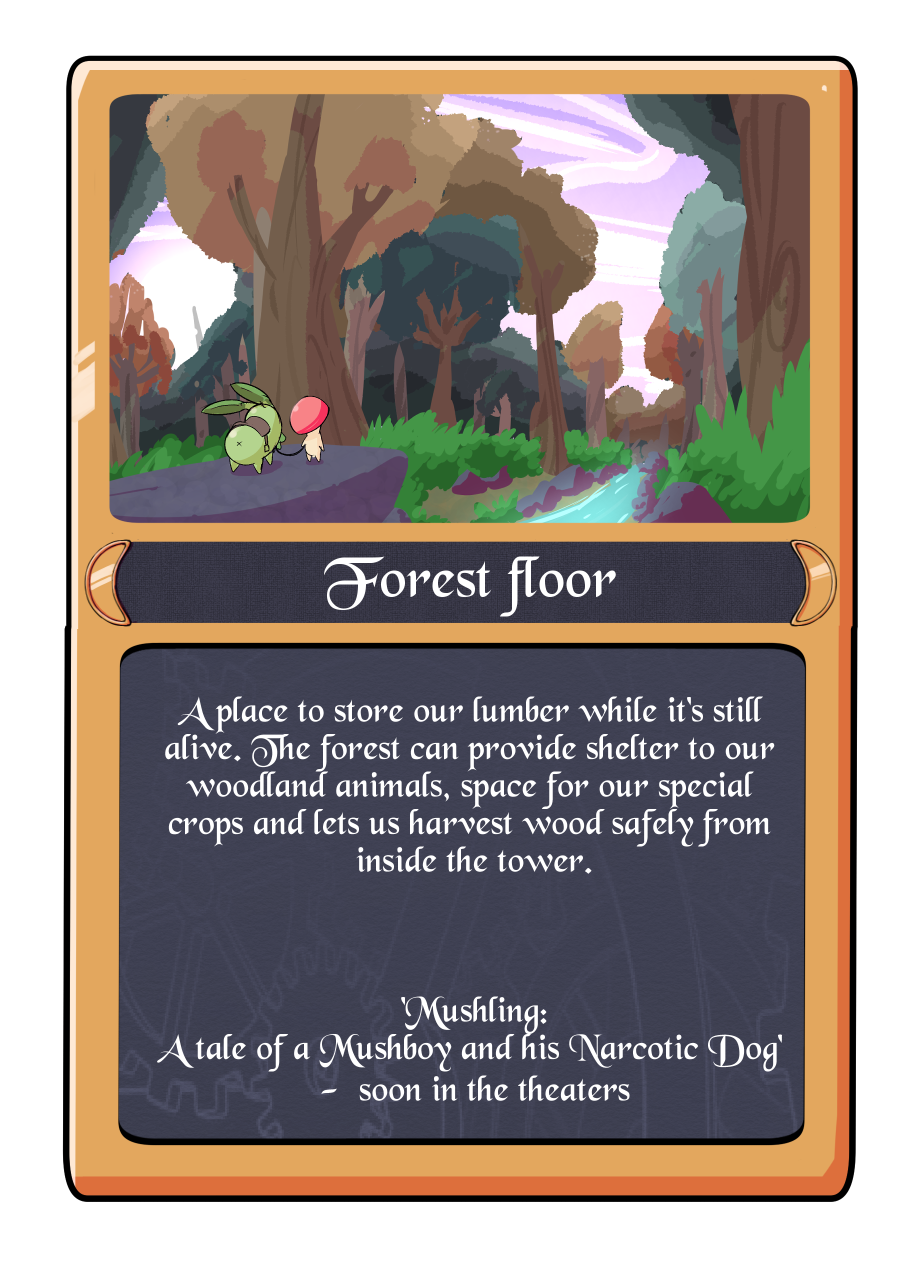 Nice, it was much faster than I expected.

I expected no less of my loyal subjects!

We even got a new species of Leaflings. It’s cool, though it delays my research a bit. I’ll let you know when I have something more about them. 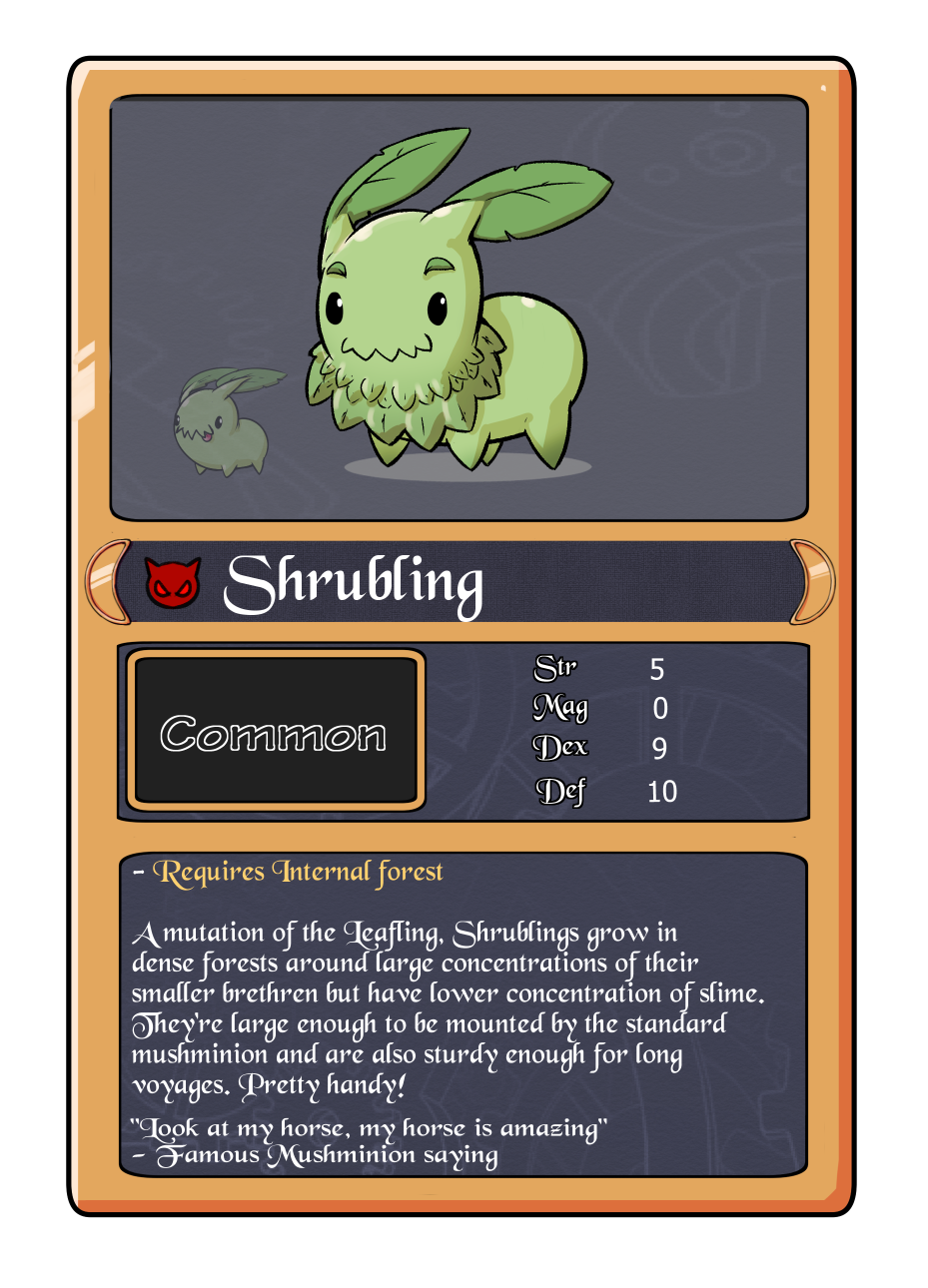 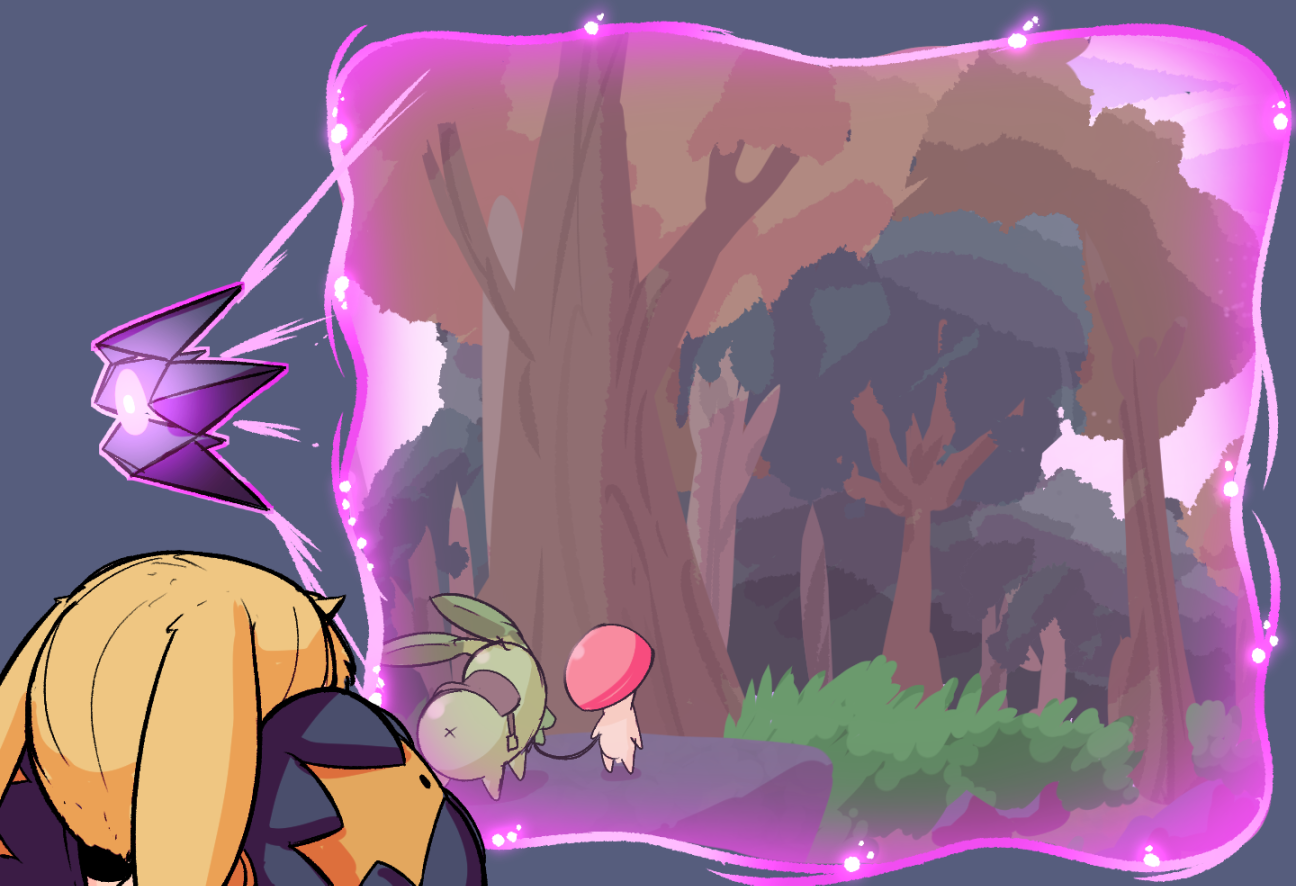 Oh, if you want, you can tell us what to build next. I can pass the message to Lily.

What facility we should build next?

Oh my glorious empire! Slowly but surely it grows!

Now can we watch some cartoons on that?

Girls! We’re almost at the pier.

A joke and a half later, the party reaches a pier leading all the way to the middle of the lake, where the mountainous spiraling shell comes out of the water. The mayor’s assistants and his son Mortimer cautiously accompany the group. 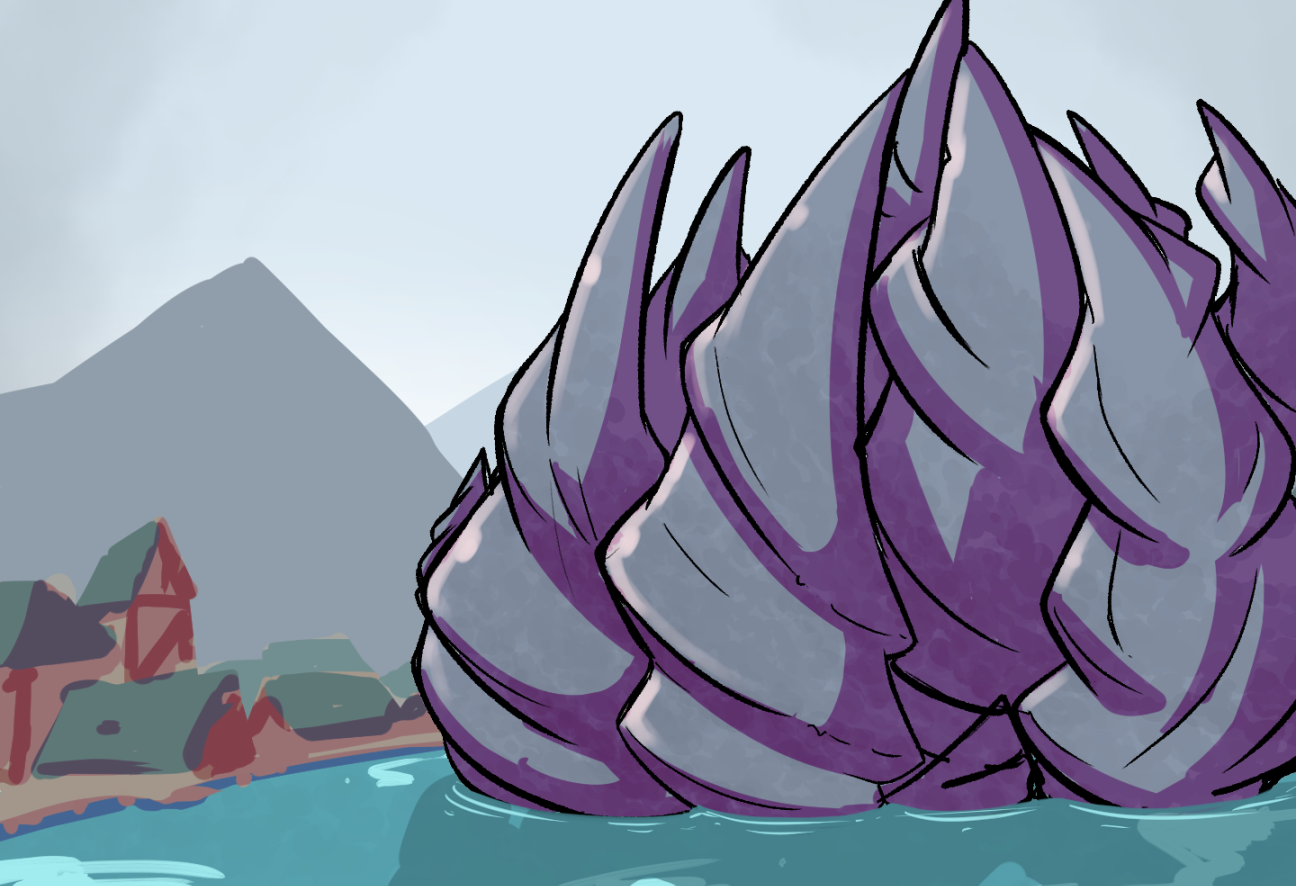 Wow, I’d heard this thing was enormous but I didn’t think it would be this huge…

The Crabee Queen has been the pride of our village for generations, or so says my pop. I really hope you guys can find out what’s wrong with the ol’ girl.

Wendy walks confidently into the pier, getting as close to the edge as she can before reaching out her hand and drawing a shape in the air, where a green light shines brightly. The earth begins to shake as a rumbling noise starts coming from under the lake.

It’s easy of you to say, you’re not a tiny eye in an armor! Have you seen the SIZE of those pincers!?

Don’t worry, she only eats what the crabee drones bring her. Besides, you’re probably too bitter for her anyway.

Pfft, you’re really getting roasted this episode aren’t you, boss?

Can we just get to it? Wendy, do your thing.

Sure! C’mere, girl. Tell me what’s wrong with you. 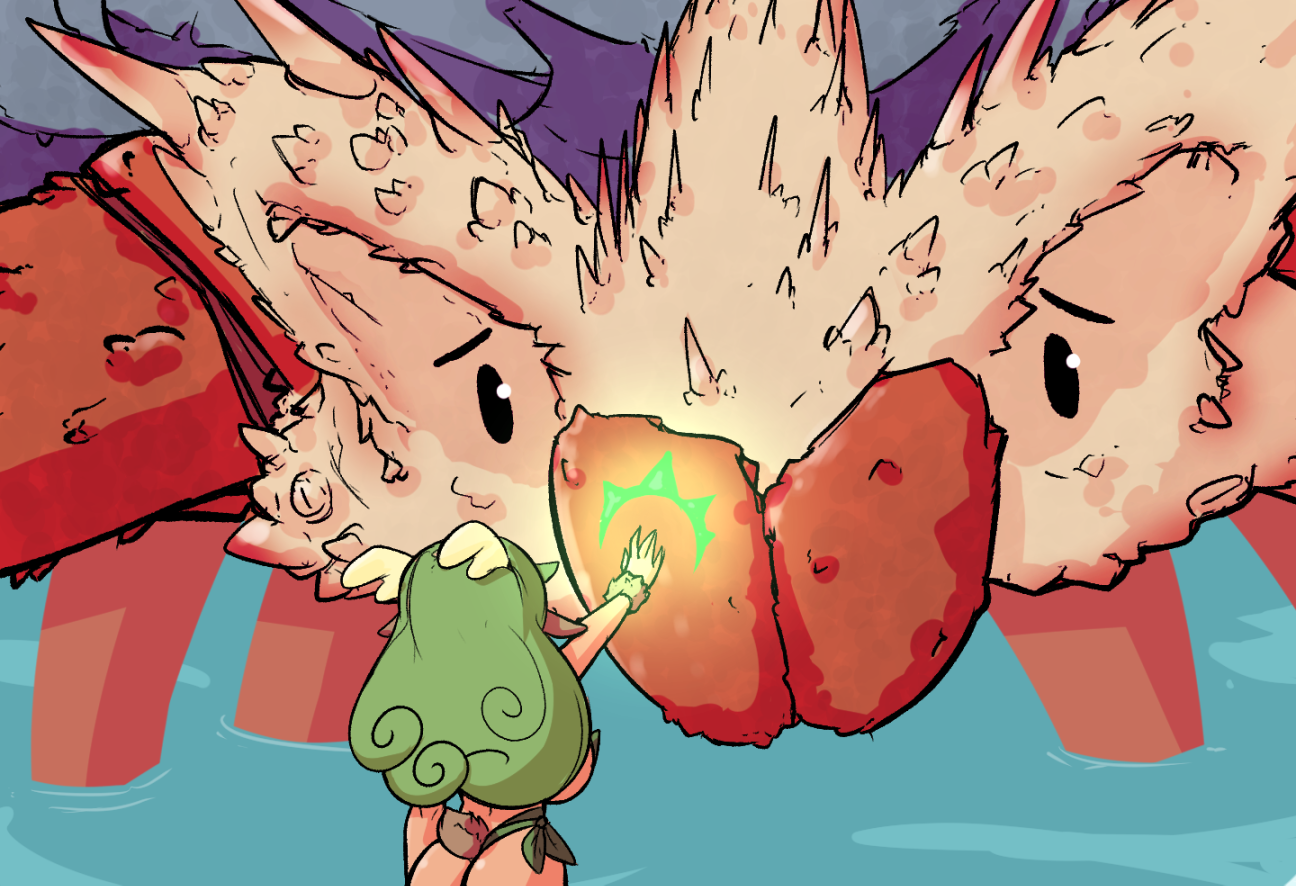 Some time passes while the druid telepathically communicates with the giant animal.

Hmmm… She tells me she’s sad… Very sad. It seems she’s lost her child. Someone took the egg from the nest below the water some weeks ago.

Technically she’s the mother of all the drones in the hive.

She lays hundreds of eggs per year, how do we know which one was stolen?

Hmm, apparently miss pincers here was about to retire. The stolen egg was supposed to be the next queen of the hive.

You look shocked, is it so weird that the lady was gonna have a well deserved rest after supplying you with free money for… forever?

I mean… It has been the queen for generations, we only take care of collecting the byproduct the drones accumulate in their backs…

Anyway, where do we begin then? How do we even know what we’re looking for?

Well, it’s a very identifiable egg, you could see it from a mile away.

But the only outsiders who came to town recently… 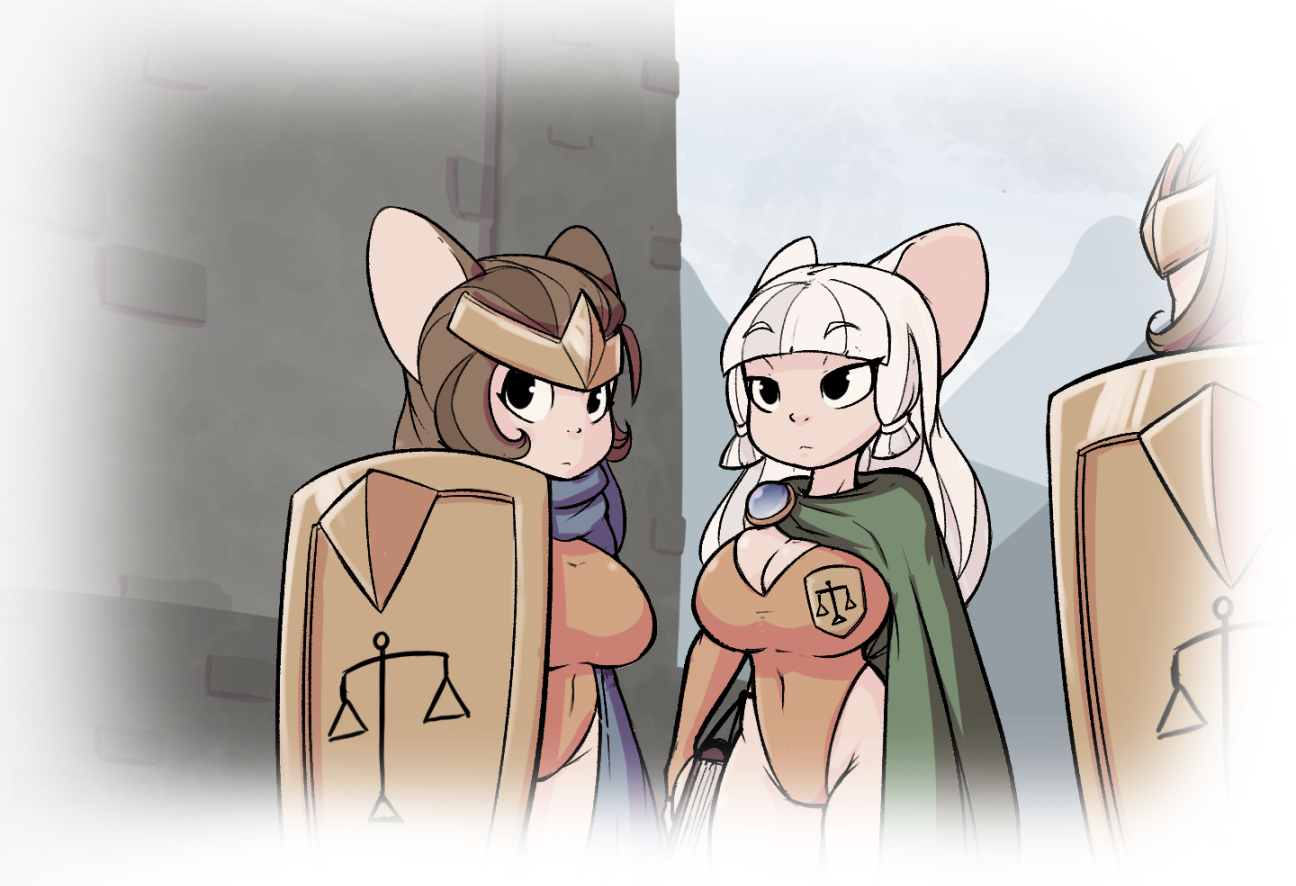 What? Isn’t the city already shoulder deep in debt to them? Why would they steal the egg? It just makes it even harder for us to pay the loans. 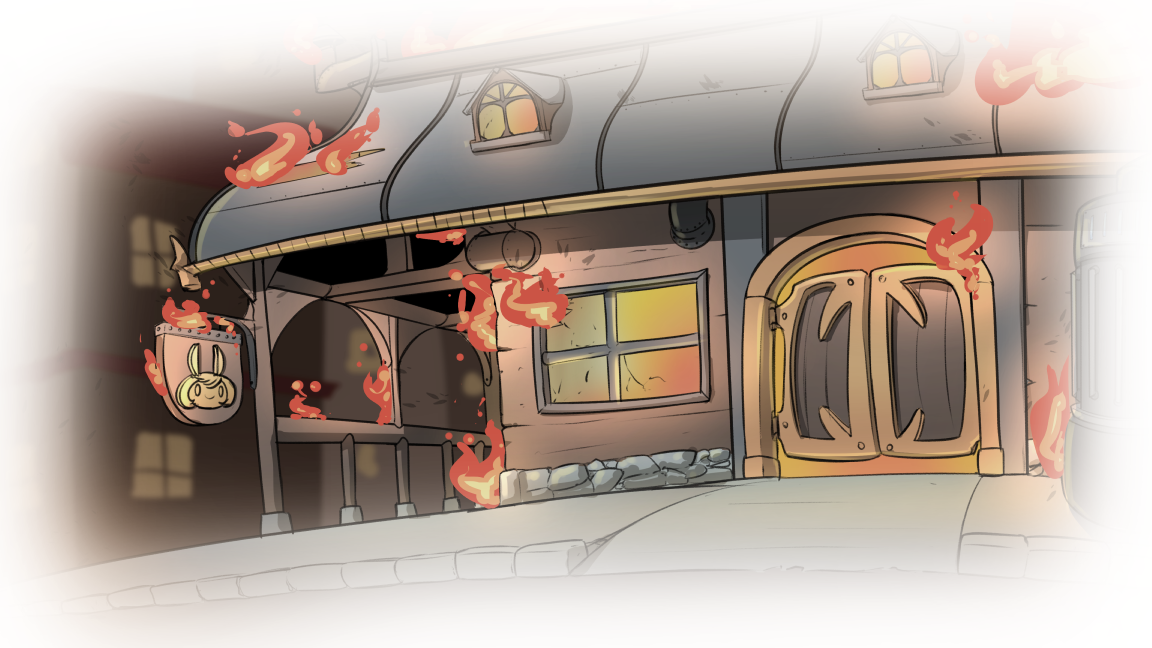 It wouldn’t be the first time they’ve done that….

Well, seems we have to find where these collectors disappeared to. It they really did it, we could get some info out of them.