Once upon a time there was a land torn to pieces…

Welcome to the Ophi’s Quest website, we are glad you are here! This is an introduction page to our project, made to answer any questions you might have about the story or the team, first of all: Who is Ophi and how did this project came to fruition? Well, if you are curious to know more about our pervy overlord bunny and how her story came to be, please continue reading, otherwise if you are a returning customer or just want to skip ahead to the juicy bits, please click one of the links below.

Read From the Beggining | Archive |  Go to the Last  Entry

Ophi’s Quest is a joint project between two Brazilian creator, Carnivate, the artist and the one who originally idealized the project and the writer Jason Belrose. With an art style that is the perfect mix of cute and sexy, Carn’s work was, from the onset, a great fit for the cute, funny and extremely tongue-in-cheek parody that Ophi’s quest is supposed to be. With a variety of quirky and likeable characters, we’re sure you’ll find something to love about our story, and, in case you don’t, let us know, we’ll do our best to accommodate your suggestions!

With the input of Hunter, our own one-man marketing department, this project spent months being cooked in Carn’s mind before he finally decided to look for help. When I joined the project, all he needed was for me to give him that last little push to put the project on track. 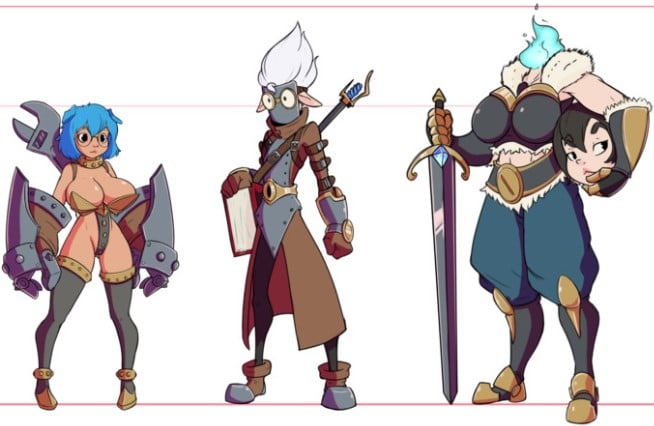 Making fun of all the usual tropes commonly found in RPG and popular video games, Ophi’s quest is a NSFW mixture of a webcomic and a choose your own adventure story with some mini-games planned for the future. It takes inspiration from several different places, such as Kingdom Death: Monster, which you can clearly see in the “armors” worn by our characters, and games such as Rance, for the overall “gameplay” and narrative.

By giving us input on each post, you help us decide the course of the story, telling us what you think the characters should do next to achieve their goals and overcome their challenges. Together we’ll shape the journey of Ophi, our main character, as she becomes the lewdest evil overlord in the history of the world! With plenty of comedy, bouncing breasts, and epic battles to be had with the enemies and the help of the companions Ophi meets along the way, we hope to create a fun story that we can all enjoy.

Patrons of the project will also get access to special polls that allow them to help us choose the next NSFW scenes to be drawn, or even add their own characters to cameo in the story and/or be picked for the NSFW scenes. Those scenes will cover fetishes from the usual vanilla content to extremely niche fetishes, and will be clearly tagged in case you want to avoid any of those.

Another thing worth noting is, as the Patreon grows, more and more features will be added to the game. Our current goal being the development of a collection game where viewers will be able to register to the site, which will enable them to own control of Ophi’s followers — randomly generated girls representing the population of the world that come to live in the Hearth of Sin. The options for each body part will increase as time goes on, but the chances of two characters having the exact same appearance are already minimal. Followers will become more capable as time goes on, increasing her stats and maybe even gaining new outfits as they progress through a massive class tree!

As the intro video tells us, Lucernia is a land made of small islands orbiting a sun, which is a divine machine called “The Beacon”, which keeps the darkness away. It was once a massive piece of land, but it was shattered by the goddesses as a last resort to stop a terrible overlord from conquering it. Ophi’s quest has a bit of a steampunk aesthetic, derived from systems such as Iron Kingdoms, it has aspires to have the same brass and leather colors that are common in steampunk art, but with some adaptations to suit Carn’s more colorful art style. The technology in it is a mixture of common steampunk tropes such as gears and steam, but instead powered by magic crystals, I personally like to call it Magitek.

Our main character Ophelia is a regular denizen of Lucernia. Through a series of unfortunate events, Ophi, as we call her, is brought to a mysterious cave, where her feelings of powerlessness regarding her own life are felt by the soul of the overlord who was sealed there centuries ago and left to be forgotten in the ruins of his own fortress. The power of the overlord calls to Ophi and brings her to the dais holding the orb where it was trapped. The seal, weakened after centuries of being left to its own devices, is broken under Ophi’s touch. The result, however, was interesting. Larahmal’s physical body didn’t leave the orb, and instead became part of his old living armor, that now clad Ophi’s body.

And that is how Ophelia’s adventures as the future Overlord of Lucernia begin.