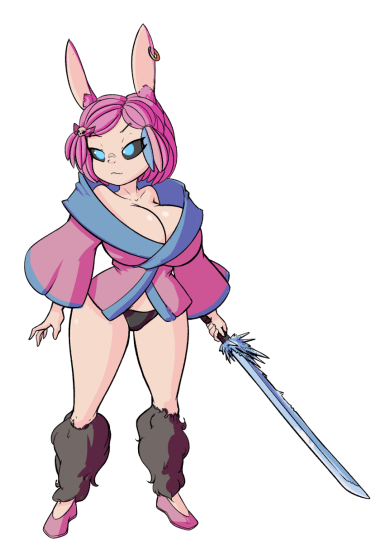 
Hana is a bunnykin from the Vale of Hops with a passion for learning new things, who happens to be one of Larhamal’s longest standing allies. Before Lucia shattered the world to make the islands that exist now, Hana learned the art of the sword from the monks of the rabbit mainland and had already earned a reputation before her “other interests” forced her mentors to suggest she begin a pilgrimage to find a means to quell her urges. During this pilgrimage, she befriended a group of shamans who enhanced her skill set to include the use of elemental magic, where she focused on the element of ice.

At some point along her travels, she ran across the Dark Elves, where she lingered to study their traditions and culture. She met Larhamal during this time, and at first the two were adversaries, but they were eventually able to find common ground and became close allies. When Larhamal lost his war against Lucia, Hana was sent into hiding to guard the portal to the Lewdimension. However, something happened which resulted in her being taken into the very portal she guarded, where she remained trapped, living among the Dark Elves for a full millennia, until Ophelia reawakened Larhamal. She is now eager to resume her duties with new knowledge and abilities acquired from her time in the mysterious other realm.