Last month on Ophi’s Quest we found out that the crisis in Steamrock Village was all due to the Crabee Queen’s egg being kidnapped! Did Bleu’s debt collectors really do this and why! Let’s find out!

Do we really think keyhole girl has a plot to take over the whole island? Why would she do that?

Why would she not! Being an Overlord is great!

That’s just you old man. I’m not sure yet, but for now the only lead we have are the collectors. They could already be all the way back to Gouda though, how will we find them…

Huginn said:
Maybe it is time to try to get some information on Bleu's plans and schemes. Try to reqruit some spies of your own.

We don’t know anyone with the proper skillset, and we’d need a spy agency to train the minions, we can’t do that yet.

haz said:
send scouts to the main city and make them get info about blue and her debt collectors. Then make a plan to secretly take out/capture their guards to weaken thier forces.

I don’t think we can do anything to the city right now, either, they’ll be on high alert after the mess we caused the last time we’ve been there.

Hmm… One thing at a time, maybe we could just go around town and gather information. Someone might have seen the collectors behave suspiciously?

We will go and warn the villagers.

We shed some light on the situation, this should raise morale a bit.

Huh, what should I do then?

Bushi said:
Start a charity campaign for the Crabee Queen. Villagers know she's important, so let them chip in some finances and share info about or help search for the missing egg by putting up missing posters around town. More help means more reward!

Mordred: Maybe we could put up some missing posters!

You know, Mordred, for once that sounds like a good idea.

Okay then, Mordred, Ceres and Mortimer go put up some posters while me and Wendy look around for information.

We can provide the advertisement material.

All we do is deal with paperwork and notifications for the people, we’ll have it in no time.

The assistants leave the group for a very short time before returning with backpacks full of posters.

Jeez that was fast, how did you get that many posters in so little time?

Our staff is very skilled in logistics, delivering fast is kind of our thing.

Huuh…. Then why are you guys farmers and not postmen?

You know what, that’s actually a good point. 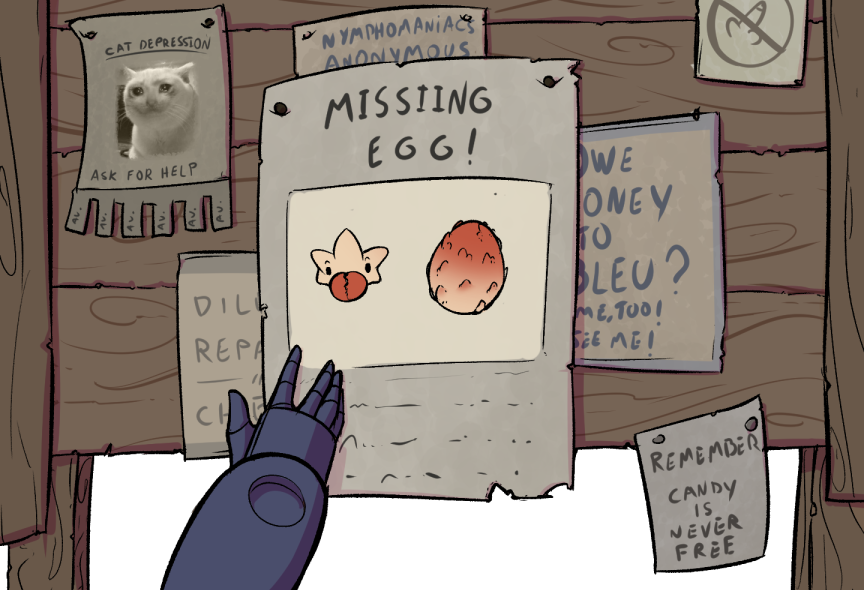 The Mayor gives a public statement about the situation that helps bring the villagers back to the streets and word quickly spread about the work the party is doing. Ophi and Wendy go around town doing some reconnaissance.

Meanwhile, let’s see if the public has some ideas for us.

I’m sure they’ve thought of very good ways to help us.

OniedgeLord said:
capture those collectors and squeeze them for information if not then it’s shadow tentacle time. and add some new followers for our new brothel 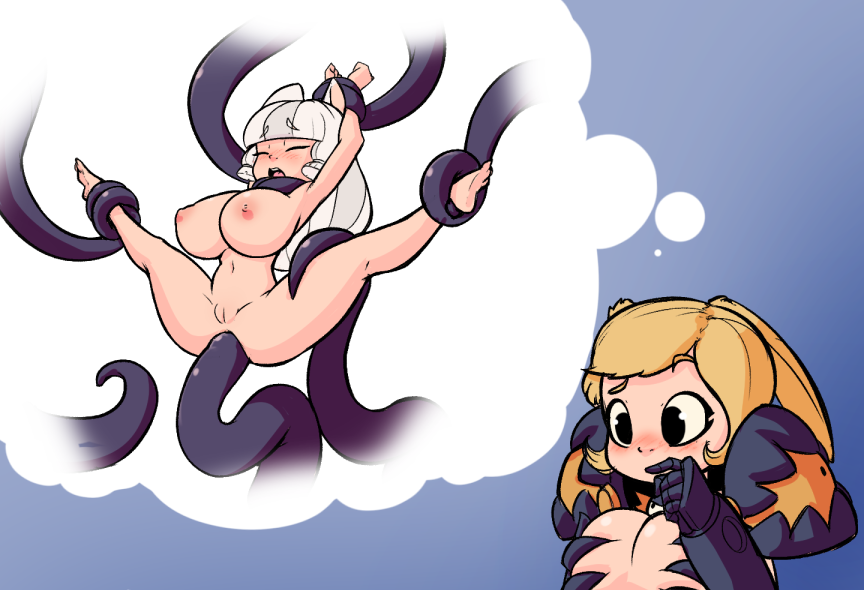 We can use the good old method!

We still need to find them first.

Huuuh… I’m suddenly not sure if I want to. The shieldmaidens were always awfully rowdy when they came to the tavern for “fun”.

Wise Guy said:
Have Ophi use her crown to see where the collectors are and use it to set up an ambush in advance, after all we would not mind a few more followers.

Oh, yeah! How did I forget, what’s the point of having a magic crown if you don’t… 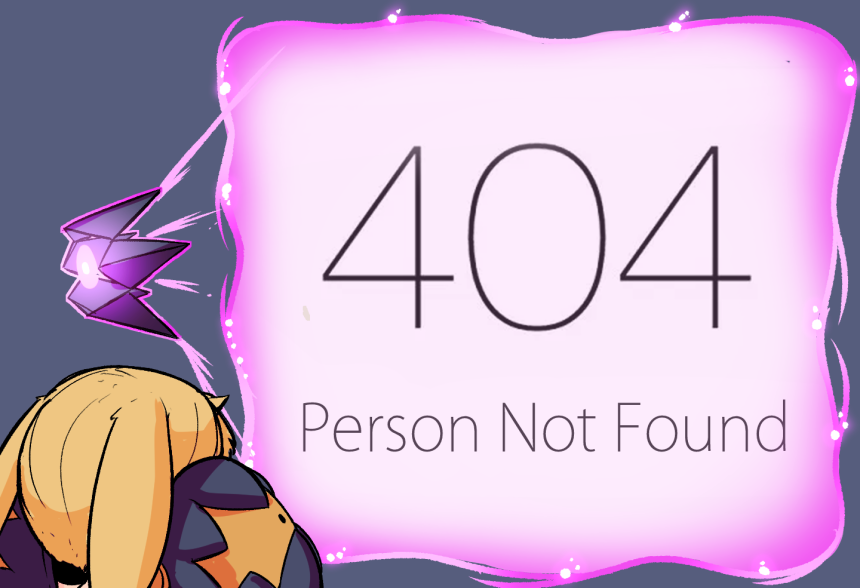 I told you, the crown can only connect you to people bound to the Hearth.

We can’t Deus Ex Machina through every plot point, honey.

Huh. I didn’t think it would be this easy anyway.

Eventually the party reconvenes at the Mayor’s house, tired from walking all day with nothing to show for it, it seems no one in town has seen the collectors doing anything suspicious.

Maybe someone will give us a call about the posters tomorrow…

Genis94 said:
We haven't a moment to lose! Let's search for clues and see if Mordred can't sniff up their trail. She's a wolf girl, so she should be able to do that, right?

Hey you, cheery girl with the sword.

My name is Mordred!

Okay, fine. Mordred… You’re a wolf, aren’t you guys great trackers? Can’t you find them by their smell or something?

Hmmm, yeah! I don’t like sniffing too much because it makes me sneeze, but I could do it!

But we don’t have anything with their smell on it, do we?

Wait! We do! I have this bank slip they paid us with. That leotard has no pockets so they keep everything in their cleavage, it should have their smell on it.

Well… Instead of taking money for the loan debt they just got a cart load of supplies. You know, travelling rations, some construction materials we had lying around…

Hmm… I don’t think they’d buy that kind of thing if they were going back to town, maybe they’re still around?

Is that enough for you, Mordred?

The Mayor produces a piece of paper with a long list of valuables from his desk and offers it to Mordred, who sniffs it with determination! 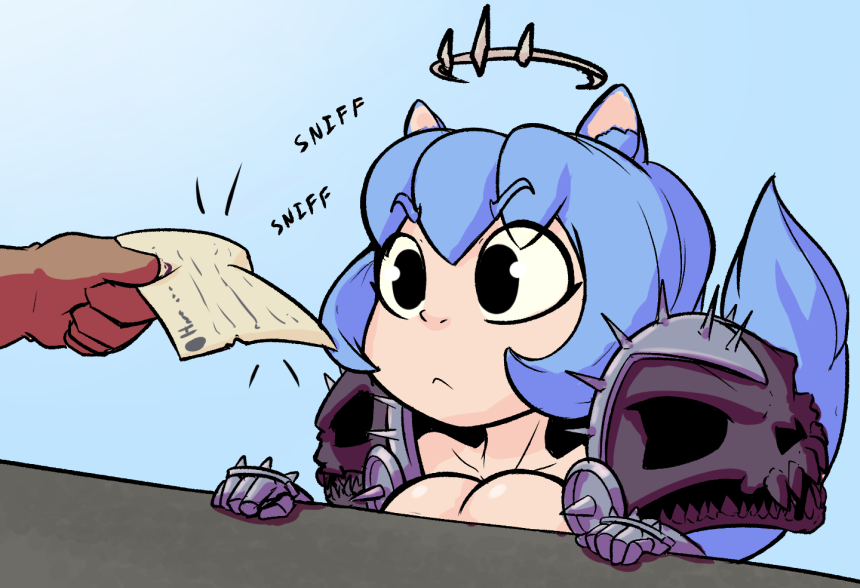 It seems her senses are still keen…. Her head… Not so quite.

Hey! Don’t talk like that about our cute comic relief.

So, did it work, Mordred?

Mordred closes her eyes and pauses for a bit, sniffing the air around the room in different directions like a kid smelling the scent of chocolate cake in the oven. After a while she finally opens her eyes and points toward the window.

Hmm… That’s weird. There’s nothing that way for several miles. More than they had supplies for.

Knolden said:
Ask to have the Mayor's son and/or one of his assistants to join you in the search. Only fair to have the town officially join in yes? (also good to have local help on hand)

Welp, it seems we gotta get on our way to save this giant crab from depression. Who’s coming with us?

Boy! You go with them, we can’t let anyone have our precious crabee egg.

No buts, young lad! Go out there and help your village! I would send these two as well but I’m gonna need help to keep the villagers in peace.

If you guys are done with your familial quip, how about we get on the road? We need to track down our enemies.

I’m still not sure about this…

Unless they fall off the nest and break their necks.

I think that’s the wrong kind of encouragement, Wendy…

It’s our chance of getting this village back on the map! Good luck girls.

The Overlord doesn’t know defeat! We’ll be back to claim our spoils!

And take care of the kid will you? He’s a bit unmotivated but between you and me, he’s a good boy.

She means yes! Yes we will. Time to go!

The Mayor hands the party some travelling supplies and points them to the path the tax collectors took out of the city. On their way out, the villagers come out of their houses to cheer at the departing girls.

What is this madness, we’re not even attacking the town, why are they screaming?

Wait… You mean they’re… happy? Why?

Because we’re helping the village?

Finally out of the village, Mordred guides the party through an entire day of march by following the scent of the tax collectors. By nightfall they arrive at a crater in the mountains where they find a small guild fortification.

There! They’re definitely inside that walled thing!

The party hides behind a rock outcrop and look at the massive building. It’s heavily fortified, even though it’s not so big, it should only fit a small barracks and that central tower, where the mouse guild’s flag flies proudly. It seems Bleu has been busy outside of town, but why? 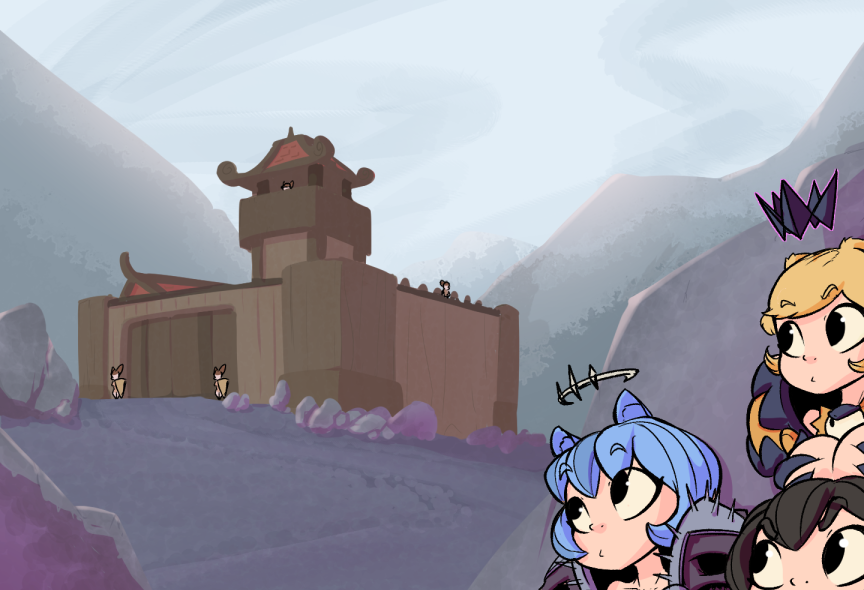 can Mordred make skeleton archers and skeleton mages (not Liches thats an advancement) for her hoard?

She have access to simple skeletons yet, sadly to unlock skeleton classes we need more research

Subterfuge is probably best, gotta get the jump on them to convert a few. Kills too birds with one stone, takes them out of the fight and fuels the hearth. So scouting, sneaking, or some kind of trickery are best!